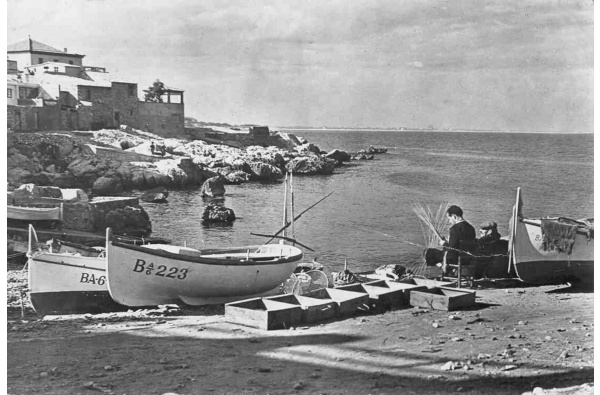 L'Escala contains the ruins of Empúries within its boundaries. They were the gateway for the Greco-Roman cultures and civilizations on to the Iberian Peninsula, from the time they first settled here in the 6th century b.C.. The territory, inhabited since prehistoric times, received the impact from a superior culture which radically transformed its foundations.

Centuries later, after the disappearance of the Empúries Counts Dynasty in the mid 15th century, according to Pella i Porgas, a small fishing district began to expand near what had been its first capital, as a result of powerful maritime trade.

L'Escala began to appear in written texts from the 16th century onwards, referred to as a small fishing and cabotage port dependent on the neighboring Empúries town. Its use as a port, however, goes much further back. Its name, from the Latin scala, frequent throughout the entire Mediterranean region, designates a port or quay, the usual shelter for boats. The dependence upon Empúries was reversed during the 17th and 18th centuries to the L'Escala’s advantage. In 1680 the new settlement counted 80 dwellers. Thus, the “Empúries Vila’s L'Escala Port” residents, were granted permission to erect their own church and, in 1766, L'Escala was given village status as well as head of the municipality.

The main reason was the extraordinary population growth, from 390 inhabitants in 1718 to 1,383 in 1787, supported by high regional immigration, it attracted new immigrants with jobs generated by the maritime customs - the Salt Storehouse, the fishing industry, the shipyards, anchovy and sardine salting, rice crops and vinyards. Wine exports and jobs which were created in the wake of the industrial activity. The traveller Zamora wrote in his diary in 1789 that “the residents all work in good jobs, the men earn good wages and there are no poor people”.

An 1806 census recorded 1,600 inhabitants; the 1857 census recorded 2,574, whereas 1877 one recorded only 2,607 inhabitants, due to deaths from epidemics caused by malaria (rice paddies) and cholera. Economic wealth grew steadily into the 20th century, primarily devoted to fishing and vineyards, with a fluctuating population until it steadied towards 1960. At that time estimated around 2,500 inhabitants.

From the beginning of the century onwards, there was a significant political and cultural activity: it was the time of the Ateneum (College) of Art and Culture, the Víctor Català Ateneum and the Youth Centre, which gave rise to drama groups, Sardana bands and the Floral Games. The civil war put a stop to all this activity and L'Escala experienced one of the most tragic episodes in its history: the bombing of the town by fascist planes at the end of the war, which caused twenty deaths among its civilians.

In the 1960s, a new phenomenon gave impetus to the economy: tourism. Small local industries gradually disappeared, and the workforce began to meet other demands such as Building and new services. The town’s fishing industry was revived when the seal Quality of origin for anchovy was created.  Eventually, population increased to the current-day 10,000 figure, though that number exceeds 50,000 in the summer high season.