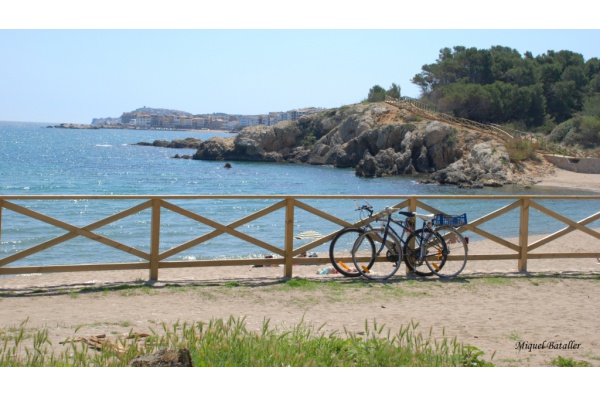 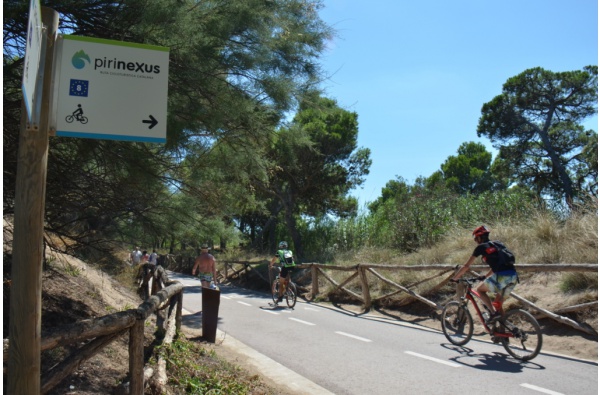 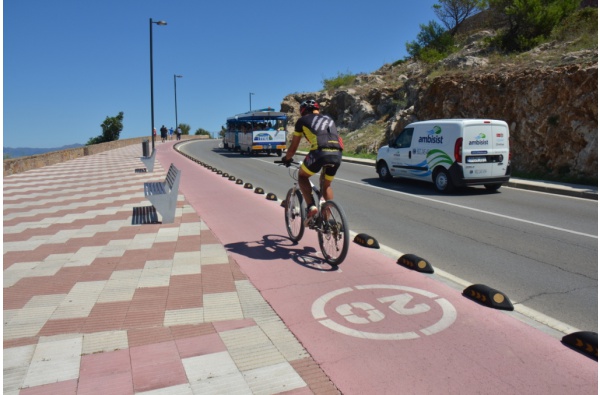 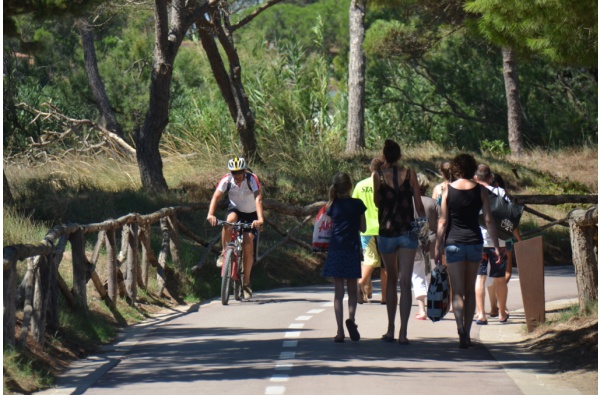 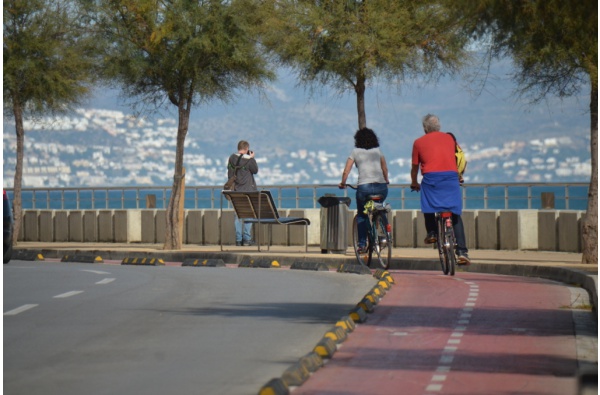 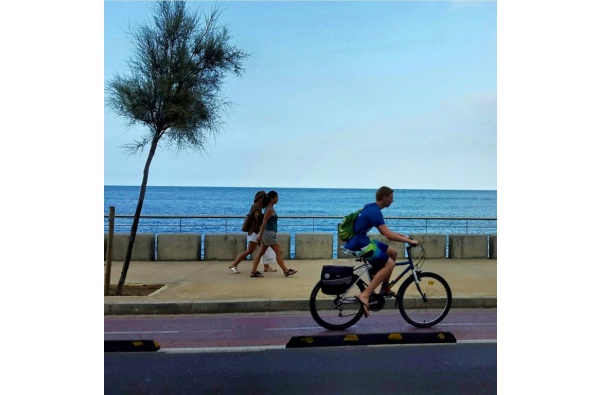 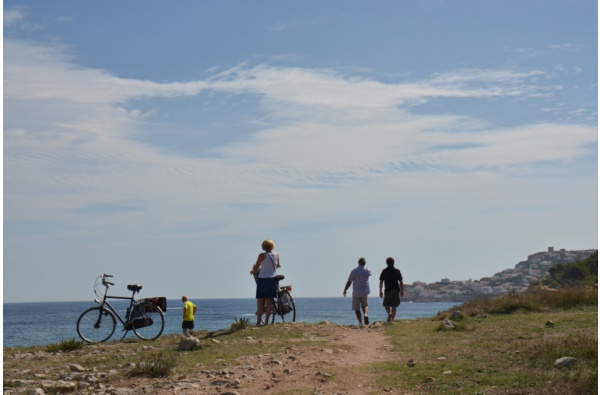 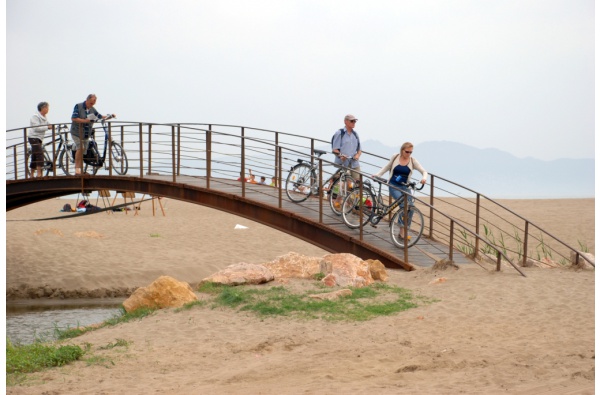 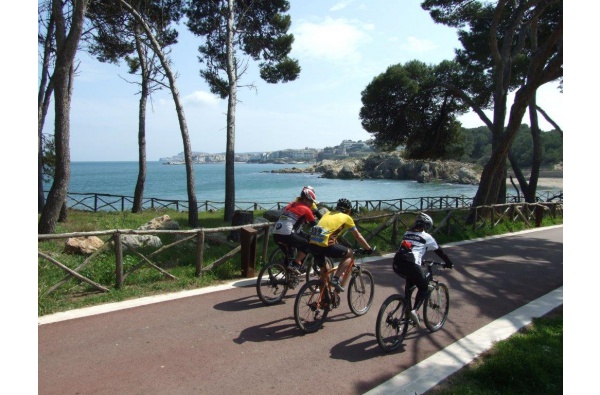 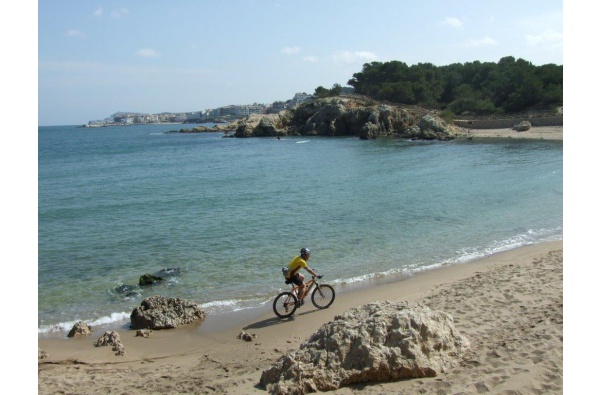 Although the itinerary includes non-cycling sections by bike, it is one of the most suggestive routes that can be done in L'Escala. We will continue along L'Escala coast, from north to south, hardly leaving the seaside. The route is simple, no danger of losing track. the possibility of loss. It alternates between urbanized and wildlife areas, passing through sandy beaches, coves, the old town and the more modern, such as Riells or Punta Montgó. The most difficult area is at the end of the route, as we pass the cliffs. It's almost all about rock. Cyclists will do well to tie the bike to Montgó and continue on foot. Despite the difficulties, the views from Punta Ventosa make up for the effort.

During the tourist season you will find some highly populated sections. Bicyclists, respect pedestrians. And also during the summer season, pedestrians may use the Carrilet to reach your departure point or to return home from Montgó.

0,93 Sant Martí d'Empúries. Forest House and viewpoint. For centuries, the Tramuntana has pushed the dunes from the Gulf of Roses to L'Escala and L'Estartit, burying roads and covering the ruins of Empúries under a sand blanket. To stop this breakthrough, in 1896 the first protrusion was made north of Sant Martí and very soon the House of the Forest man was begun to construct, where the person in charge to supervise the works would reside. We join the promenade that was developed on 1992, on the occasion of the arrival of the Olympic flame in L'Escala.

1,23 Greek Breakwater. In some sections, pedestrians may cross the paths that follow the road closest to the sea.

1,96 Hotel Empúries. After passing the hotel, pedestrians can climb the stairs following the coastline.

3,17 Pedró. You will reach l’Escala centre. Go down the steps.

3,53 Casa del Gavià. Vantage point over La Platja. Next, climb down the steps and you will be by Platja de les Barques.

3,85 Keeping the sea on your left, climb the hill to La Punta, where you sill see a monument dedicated to the people of the sea. It is a place that is very sunny in the days of Tramuntana and it is ideal to watch the sunset

4,35 El Codolar burying roads and covering the ruins of Empúries under a sand blanket. To stop this breakthrough, in 1896 the first protrusion was made north of Sant Martí and very soon the House of the Forest man was begun to construct, where the person in charge to supervise the works would reside. We join the promenade that was developed on 1992, on the occasion of the arrival of the Olympic flame in L'Escala.

4,43 Clos del Pastor. Caterina Albert House Museum. Fifty meters further on we find the monument dedicated to the sardana, by Francesc Anglès García. This point marks the dividing line between the historic center of L'Escala and the new districts. Here begins the Paseo Marítimo, which will take us to Riells. Formerly fishermen used the area to dry and repair nets.

4,66 The Rock of the Friar. It was on the waterfront, until a hurricane ripped it off. On the right is the Hotel Nieves Mar, founded by the heirs of the owner of the inn, which Josep Pla used to visit when visiting L'Escala.

5,33 Riells. Monument to the Little Prince. We follow the beach and when we arrive at the Pizza Pazza pizzeria we turn left.

6,22 Port de la Clota. We crossed the port facilities without separating ourselves from the water sheet.

7,05 Arriving at Dive Paradis, on the left, and before arriving at Dive Center, on the right. We leave the port and enter a coastal area that has remained paradoxically untouched by buildings thanks to being a military zone until 1993, that is, during the years of greatest urban development. It is a cliff area that shows us wild, stony and dry vegetation nature, barely disturbed by

Follow the coast in a southerly direction. This section can be walked on foot without problems, following the paths that follow the coast. Cyclists will have more difficulty because of the large number of stones in it .

9,00 Mateua Island, a very popular cove for divers. We continue along the path behind the pool.

9,23 Take the street that runs parallel to the sea. The climb begins. Cyclists on the sidewalk are in the opposite direction. We continue along the Punta Montgó and Garbinell streets, which will lead us to the top of Punta Montgó.

10,54 . Punta Montgó (106 meters above sea level). The tower that crowned the hill was part of a signal system to alert pirates to the coast. Down the rear are bunkers built by the Franco dictatorship during World War II. The defensive system was complemented by similar locations for artillery pieces elsewhere on the coast, such as those on the other end of Cala Montgó, in Punta del Milà. To get down to Cala Montgó, walkers can do so on the right, following a more or less marked path that goes out near the tower. Bicyclists must return to where they came from, and at the end of Punta Montgó street, turn left.

11,54  When you reach the end of the urbanization, we turn around at the roundabout and continue on Port del Rei Street (count, which is opposite).

12,27  Montgó cove. We continue along the path that goes out from behind the rescue hut. From this point we must follow the red and white paint marks, without turning off the coast to the end, when we have to face a long and steep climb.